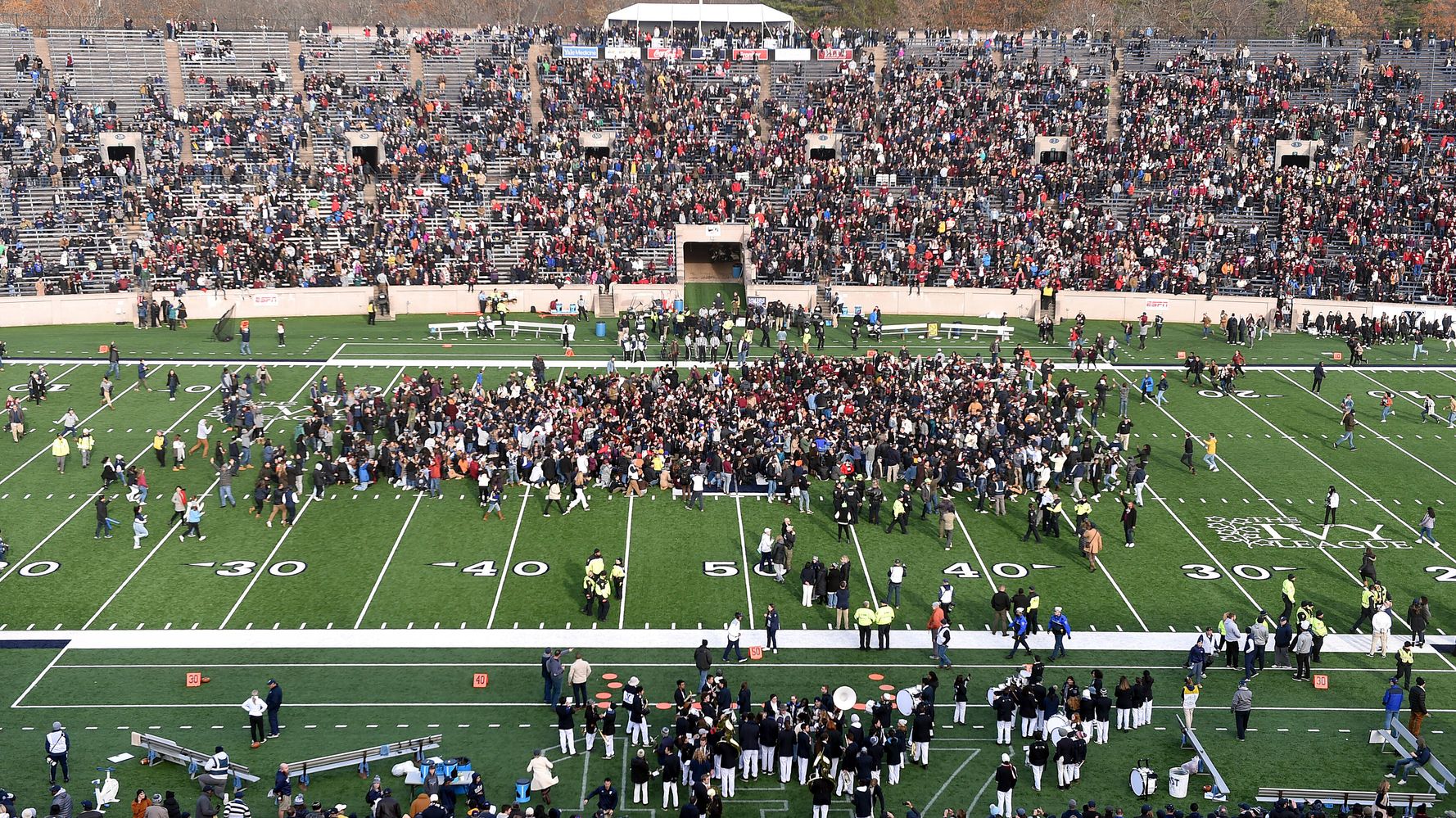 Well over a hundred protesters interrupted the annual football game between Harvard and Yale Universities by rushing onto the field and staging a sit-in to protest the schools’ investments in fossil fuel companies.

Footage filmed from the stands of the Yale Bowl in New Haven, Connecticut, show a group of students bringing signs onto the field before the start of the second half.

One read: “Nobody wins. Yale & Harvard are complicit in climate injustice.”

“This is an emergency,” read another.

The demonstration was a joint effort of the student-led environmental activism groups Fossil Fuel Divest Harvard and Fossil Free Yale.

Shortly after the first group of protesters took to the field, more people left the stands to join them. At one point before the demonstration was disbanded, there were an estimated 500 people on the field, NBC News estimated. The Guardian estimated that there were 200 protesters.

Faculty, students and alumni from both schools participated in the protest, which lasted less than an hour. Yale went on to beat Harvard in the game, 50-43.

The Harvard-Yale football game has been delayed due to students protesting climate change in the middle of the field. pic.twitter.com/uY9Kc3Mn32

The protesters urged leadership from both schools to stop investing in fossil fuel companies. They also called on the universities to cancel debt owed by Puerto Rico, which Yale and Harvard both benefit from via investment holding companies.

The Washington Post reported in July that at least some of Harvard’s $39 billion endowment is invested in fossil fuels. In 2018, the Yale Daily News found that the university had $78 million invested in natural gas producer Antero Resources.

The demonstration was part of a growing wave of similar protests around the world demanding that corporations, religious groups, organizations, schools, and especially big banks divest their money from the fossil fuel industry.

Activists at both Yale and Harvard have been pressuring their university’s leadership to step away from profiting from energy companies that are causing climate change ― and it’s had some impact.

In May 2018, a member of Harvard’s Board of Overseers, Kathryn A. Taylor, resigned in protest of the ethical implications of the investments tied to the university’s endowment. Taylor said in a statement that Harvard profits from “activities that might and likely do accelerate us toward climate disaster,” calling it “unconscionable.”

At least 50 people were escorted off the field by police in an effort to dispel the protest, according to the Harvard Crimson.

They demanded their universities divest from fossil fuels & cancel Puerto Rican debt 💰 #NobodyWins once our ecosystems are destroyed for profitpic.twitter.com/gP43X1kvWB

After the game, Harvard football team captain Wesley Ogsbury sent a filmed statement expressing his support for the protesters and their movement to fight climate change.

Ogsbury called on the presidents from both universities “to divest from the fossil fuel industry now for the sake of our generation.”

“Both of our institutions continue to invest in the industries destroying our futures. When it comes to the climate crisis, no one wins,” Ogsbury said. “Harvard and Yale can’t claim to truly support knowledge while at the same time supporting the companies engaged in misleading the public, smearing academics and denying the truth.”

Yale said in a statement that the university supports free speech but expressed regret over the interruption of an important game for both teams.

It is regrettable that the orchestrated protest came during a time when fellow students were participating in a collegiate career-defining contest and an annual tradition when thousands gather from around the world to enjoy and celebrate the storied traditions of both football programs and universities.