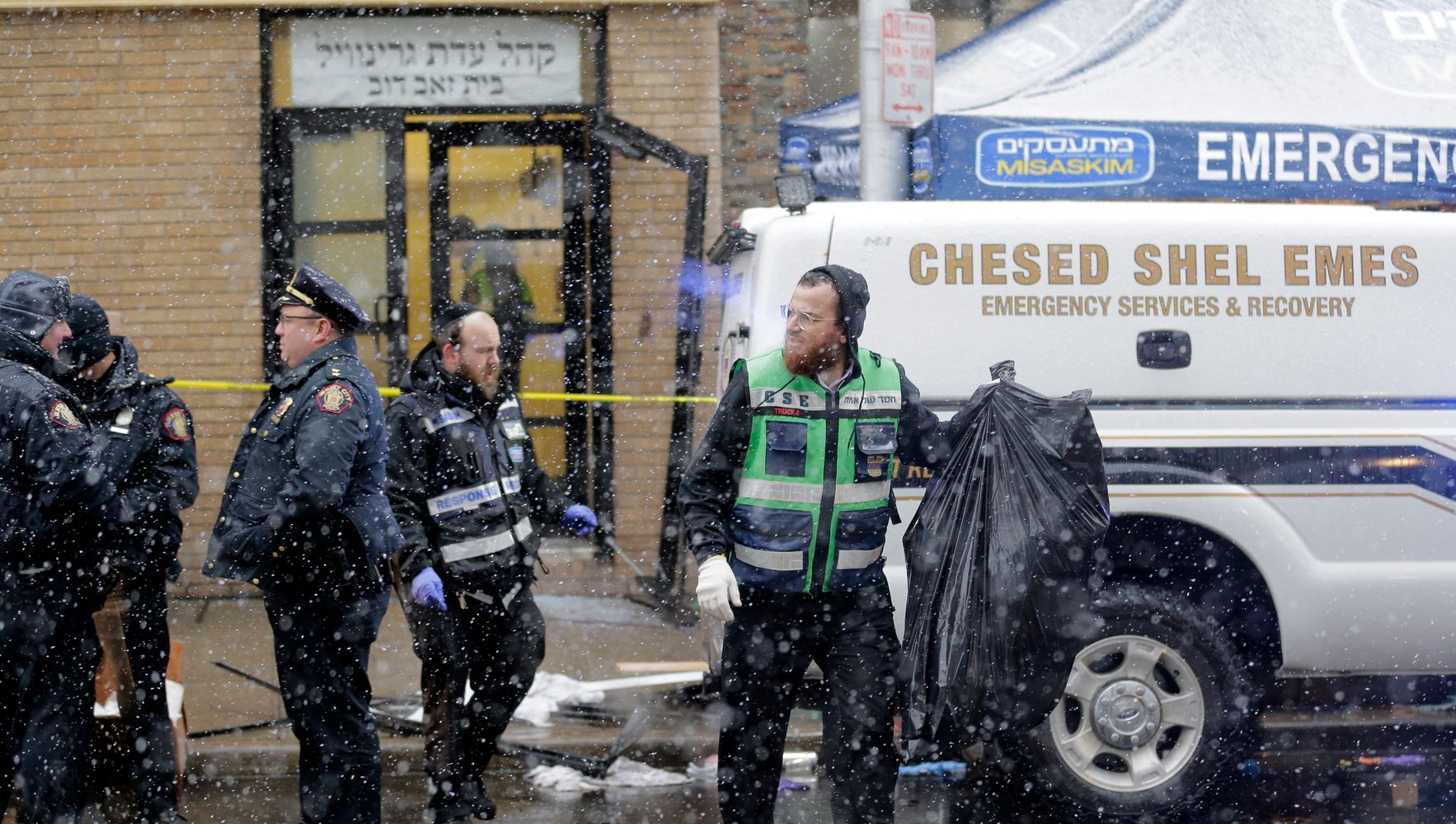 Officials initially said the incident on Tuesday ― which left six people dead, including a police officer ― did not appear to be a hate crime and that the shooters entered the Jewish market at random.

“On the video, they parked the van, they exit the van with the long guns in their hands and immediately began firing toward the location,” Shea said, adding that the shooters “bypassed” other bystanders and shot into the market.

One of the suspects published anti-Semitic and anti-police posts online ahead of the shooting, The New York Times reported, citing a law enforcement official familiar with the investigation.

Investigators found a note with apparent religious writing inside the U-Haul van the suspects drove to the market, reported NBC New York and the New York Post. They also found a live pipe bomb inside the van, according to the Times.

Shea on Wednesday stopped short of calling the attack “anti-Semitic” and said the shooters’ motives are still being investigated.

Gun shells and destroyed debris from inside the store. Remanents of the wall and other items are ridden with bullet holes. Workers have been here since 6am cleaning up and boarding up the shop. pic.twitter.com/nwD2021yoG

Before the shootout at the market, the two assailants fatally shot Seals at a cemetery about a mile away. He had approached the suspects because they were sitting in a U-Haul van that was linked to a recent homicide, reported the Times. The shooters then drove to the market, where they opened fire.

As of Wednesday morning, officials had not publicly identified the attackers or the victims inside the market. Jewish leaders identified two of the victims as Mindel Ferencz, the 33-year-old wife of the market’s owner and mother of five, and Moshe Deutsch, a 24-year-old rabbinical student.

As hundreds of rounds of gunshots rang out, 40 children were huddled inside a yeshiva located in the same building as the market, the Anti-Defamation League told HuffPost.

“What happened to those children ― they’ll never be able to erase that,” said Evan Bernstein, ADL’s regional director for New York and New Jersey.

Roughly a dozen schools in the area were on lockdown for hours during Tuesday’s shooting spree in Jersey City, which is situated to the west of Manhattan across the Hudson River. It’s the state’s second-most-populous city with a population of about 270,000.

More bullet holes seen in the windows at a school (Sacred Heart School) across the street from the targeted kosher store. Local residents tell me there were students inside when it happened. pic.twitter.com/aRswtiXL7y

It’s likely more people would have been killed in the shooting had it not been for two officers on patrol a block away who heard the gunfire and immediately responded, Fulop said Wednesday.

“The reason that those perpetrators seemed to be inside that deli and not able to move potentially to the school or to inflict more harm was because the police responded immediately and returned fire,” the mayor said.

“This was a premeditated violent anti-Semitic hate crime,” he said during a press conference Wednesday, adding that NYPD officers have been placed on “high alert” following the shooting.