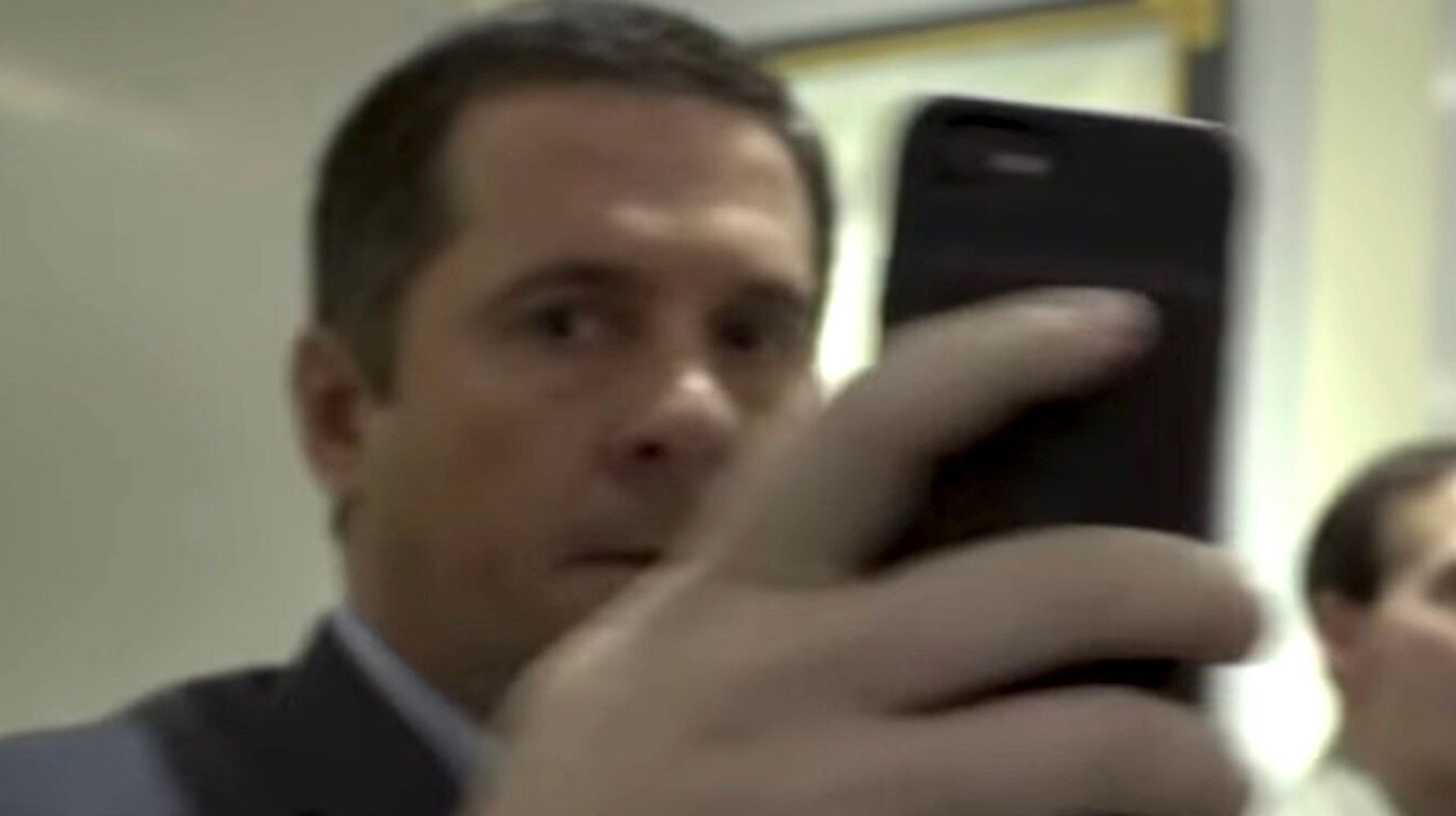 Rep. Devin Nunes (R-Calif.) is being mocked on Twitter after claiming that he’s the victim of someone who “stalked” him.

However, the image he shared on Twitter was of reporter Lee Fang of The Intercept ― and footage doesn’t show stalking but rather ordinary reporting.

Video from the scene shows Fang identifying himself, then calmly attempting to question Nunes outside a $15,000-a-plate GOP fundraiser on Saturday.

Specifically, Fang asked ﻿Nunes about his contacts with Lev Parnas, an associate of Rudy Giuliani ― attorney to President Donald Trump ― who has been indicted on federal campaign finance charges.

“What was the content of those calls?” he asked. “Were you part of this effort to pressure the Ukrainian government to investigate Hunter Biden?”

Nunes does not speak in the footage but instead shakily photographs both Fang and the camera operator filming the encounter.

This guy stalked me in hotel lobby after my appearance on ⁦@foxandfriends⁩ Saturday AM maybe he was in Vienna with @cnn #goodnightVienna pic.twitter.com/uQdhvgnLcq

The Intercept said Nunes spoke to a Capitol Police officer, who ordered the reporters out of the hotel where the fundraiser was held.

But given the routine nature of the encounter ― a reporter who identifies himself questioning a congressman about a matter he’s allegedly involved in ― critics were quick to call out Nunes for some “snowflake” behavior:

These Republicans are either bullies or snowflakes or, as in Nunes’s case, a combination of both. https://t.co/q9GG03yOZg

Devin Nunes is so scared he got caught he is literally SHAKING fifty seconds into this video when he gets called out again. pic.twitter.com/elp8EViFcA

Here is the person paranoid snowflake Devin Nunes falsely claims was “stalking” him. He is a reporter professionally asking questions in a public place about Nunes’s contacts with Lev Parnas. pic.twitter.com/TbMNPEbkvR https://t.co/Os1r4yKc6u

I just watched his video. He identified himself as press and asked you questions. You’re the infamous Devin Nunes, trying to rig democratic elections—what do you expect to happen when you’re in public? #Snowflake #ComplicitGOP

A reporter asked you a question at a public event? My God.

Are you OK, sir? Do you need to sue your way through the trauma?

He told you who he was and asked for some very basic info.
Don’t have a cow man.

oOOooooOoOooooo no! A reporter who very clearly identified himself as Lee Fang from The Intercept wanted to as you, an elected representative, w question?! Oh no! Are you okay, Devin? Oh me oh my

“Stalked” lol what a tender little cream puff you are.

No that’s a reporter asking questions that they won’t ask in your safe space on Fox and Friends.

He was doing his job. You should give that a try sometime.

Is there a bigger snowflake than Devin Nunes?

Are you ok? We all know how traumatic you find it when you’re asked legitimate questions.

When you say “stalked” do you mean the legal definition or are you just loosely using language with the intent to stir people up? Because all reporters “stalk” under the seeming meaning you are using. But you are now worth a follow, @DevinNunes !

I prefer this angle. The “content of those calls” with Lev Parnas now please, congressman. pic.twitter.com/lknQzncw4V