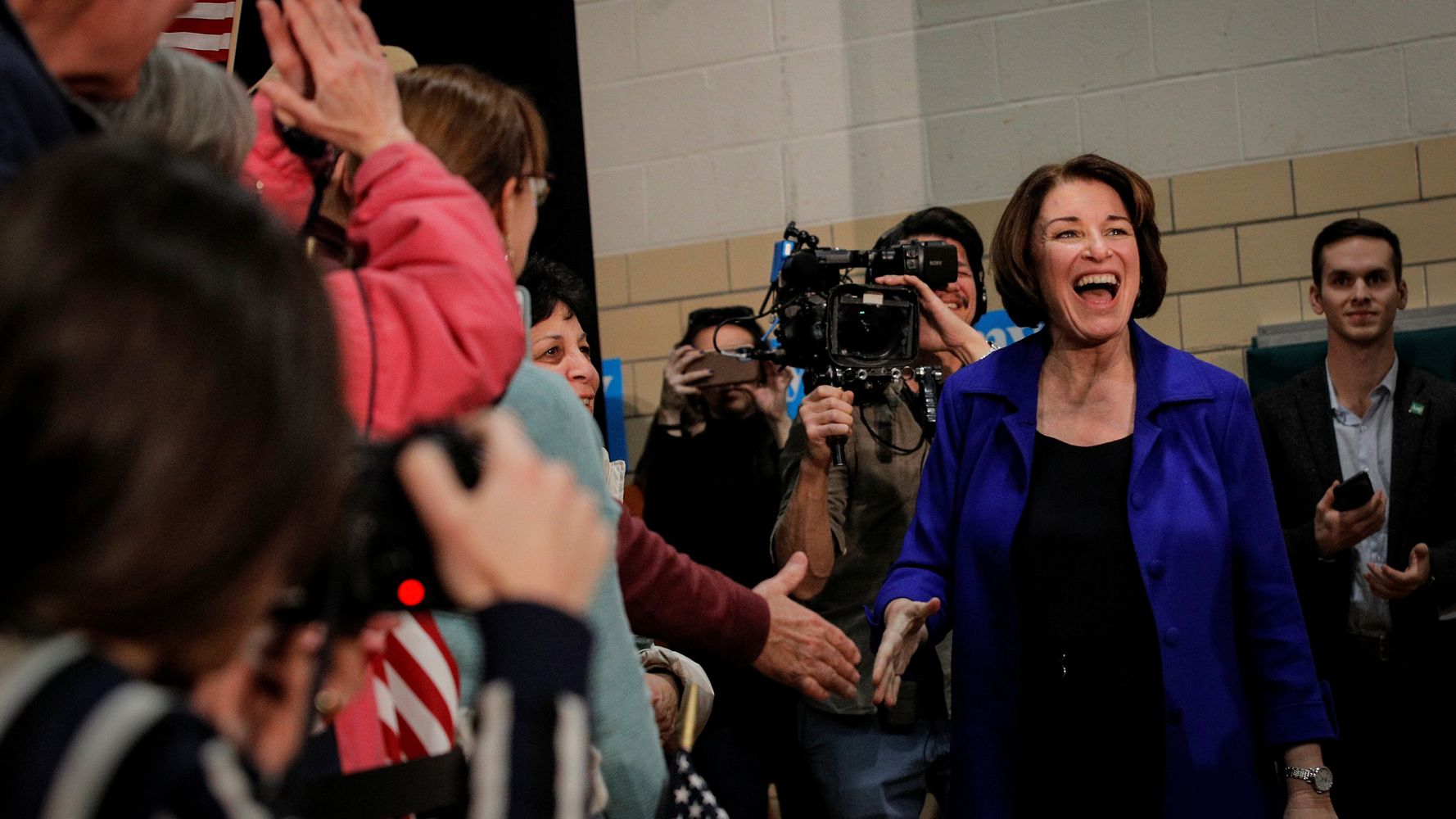 SALEM, N.H. ― This was supposed to happen in Iowa.

Minnesota Sen. Amy Klobuchar had gone to all 99 counties in the Hawkeye State, the only top-tier candidate to do so. The good people of Iowa would appreciate her corny Midwestern humor, and Klobuchar’s surge ― the one pundits wouldn’t stop predicting, often in the face of all available evidence ― would finally happen.

Instead, Klobuchar finished fifth, receiving just 12% of the vote and a single national delegate in the state. She had spent much of the run-up to Iowa trapped in Washington, serving as a juror in President Donald Trump’s impeachment trial. But that fifth-place finish ― only a few points behind former Vice President Joe Biden, the national front-runner at the time ― was just good enough to claim a bit of momentum heading into New Hampshire.

Following a strong performance at Friday’s Democratic primary debate in Manchester, Klobuchar seems to be having her moment. At a rally in the Republican-leaning town on the Massachusetts border on Sunday night, she was ebullient.

“I have been bolted down on my desk in the Senate,” Klobuchar said to a crowd of roughly 1,000 that broke out into sporadic “Amy, Amy” chants. “And I am finally unleashed.”

The evidence of a surge for Klobuchar, who drew a similarly sized crowd in Nashua earlier in the day Sunday, is mounting. A spate of polls have found her jumping into the double digits in the Granite State, directly challenging Massachusetts Sen. Elizabeth Warren and Biden for third place and greatly complicating South Bend, Indiana, Mayor Pete Buttigieg’s path to both a victory here and a potential presidential nomination.

For Klobuchar to become a threat that could actually triumph at the Democratic National Convention in Milwaukee this summer, she will need to drastically boost her performance with Black voters. A Quinnipiac University poll released Monday found her polling at 0% ― yes, 0% ― among African Americans. Unless she quickly improves on that end, she’ll mostly serve as yet another moderate candidate dividing the vote and making it easier for progressive Vermont Sen. Bernie Sanders to win.

At events in the Granite State, voter after voter said they were deciding between her and Buttigieg, with many citing her debate performance as the reason they decided to give her candidacy a second look.

Rich Sigel, an attorney from Manchester who attended her event in Salem, was among her few dedicated supporters in the state. (He decided to back her not long after she entered the race last February.) But he said he’s been bombarded by friends interested in supporting her.

“I’ve been getting texts all day from friends who saw her at the debate, who saw her at a [New Hampshire Democratic Party] dinner, who are heading in her direction,” Sigel said. “She’s the little engine that could.”

Gerry Frazier, a retired electrical engineer from Atkinson, said he was leaning toward Klobuchar over Buttigieg because of the latter’s relative lack of experience.

“I like her experience in Washington,” he said. “I wish he could be Amy’s vice president for eight years and then slide into the White House.”

Dennis Chmiel and Mary Ann Santilippo, a husband-and-wife team of veterinarians who attended Klobuchar’s rally in Nashua, said they were deciding between Klobuchar and Buttigieg. They liked her ability to bring people together and win in red areas, but they also admired Buttigieg’s military service and thought Trump would find “less to dig up on him,” in the words of Santilippo. Both, they hoped, could “bring back normalcy to America.”

One factor they were weighing: Can Klobuchar surpass Buttigieg and become the moderate front-runner?

“We really don’t want Bernie to become the nominee,” said Santilippo, explaining that they didn’t think his left-wing politics can win over the moderates necessary to defeat Trump.

In other words, for the Klobuchar surge to happen, Klobuchar might need to convince voters that the Klobuchar surge is happening. And she’s certainly trying. While other candidates eschew basically any process talk, a portion of Klobuchar’s stump speech was about how well she is doing: She was in third place in a new poll, she’s raised $3 million since the debate and her last rally was standing room only.

Much of Klobuchar’s stump speech is unchanged: She talks about how she’s been able to win, even in Minnesota’s most conservative areas. She lays out a center-left platform, including a public option for health care. She says the election will serve as a “decency check,” laying out a litany of Trump’s most unhinged moments, like when the president blamed Canadian Prime Minister Justin Trudeau for the Canadian Broadcasting Corporation’s decision to cut him out of some broadcasts of “Home Alone 2: Lost In New York.”

Like she did in Iowa, Klobuchar peppered her speech with local references ― her numerous references to Sens. Maggie Hassan and Jeanne Shaheen have become a running joke among Democratic operatives here. She’s also tried to hit New Hampshire cultural touchstones, such as making a visit to the restaurant Chez Vachon and having a bite of poutine.

“It’s not shared prosperity when we don’t get the kind of infrastructure we want, like [a long-discussed passenger rail line from Boston] to Southern New Hampshire,” she said in Salem. “It’s not shared prosperity when I literally went to Iceland, where they’ve got all those volcanoes, right, and they have better cell phone service and better high-speed internet than they do in Franconia Notch.”

Klobuchar’s frequent local touchstones aren’t the only thing she might struggle to replicate when the race goes to bigger and more diverse states starting with Nevada, then South Carolina and then Super Tuesday. While Klobuchar has had online fundraising bursts after debates, she has typically not kept pace with Warren, Sanders or Buttigieg, never mind the hundreds of millions that former New York City Mayor Michael Bloomberg has at his disposal.